Now that we have a sense of how money works (Part Two), we can begin to explore some of the tough issues that banks and central banks have to deal with. We will also explore the lesser-known consequences of today’s monetary practices. We will explore:

Thereafter, in Part Four, we will explore how Bitcoin (as a system of money and payments) is not been plagued by these challenges.

At the time of writing this article, nearly 2 billion adults today are unbanked. Those that are banked pay bank fees that generate billions of dollars of profits and executive salaries for banks and bankers, without receiving the commensurate value for those fees. Cross-border payments are grossly inefficient and expensive. The poor are usually the ones paying back loans at higher interest rates than the wealthy. And this is is just the tip of the ‘financial oppression iceberg’, as these articles will reveal.

Bitcoin introduced the possibility of censorship-resistant, decentralized finance. A system of money, payments and finance that does not require costly intermediation by banks. Bitcoin as a form of money is global and programmable. Its technology is formidable, and it has the ability to change much more than what even Bitcoin maximalists realize. Using Bitcoin technology, SIOTech World is building solutions to address these challenges!

The increased popularity of cryptocurrencies has certainly made the ‘unsound money’ description of fiat money more top of mind, and it spurred us into challenging our old notions of money. Currency failures, the (perceived) dangers of Quantitative Easing (see below) and inflation is in the cross-hairs of consumers now more than before.

The effects of inflation over time

Look at the money supply over the last 100 years and see the reduction in buying power during the course of those 100 years (diagram below). This has not been much of an issue because people did not live long enough to see how their money is being devalued by inflation.

But now, people will live much longer. Medical advances are extending average life spans. We will now more acutely feel the reduced buying power of our money because we will be around longer.

I recently read that about 30 currencies failed due to hyperinflation in the last 100 years. The effects of hyperinflation can be devastating to individuals and families. Some currencies that have failed spectacularly include:

Because of the devastating effects of hyperinflation, cryptocurrency evangelists can sometimes be too quick to blame monetary authorities and their quantitative easing programmes as the reason for future episodes of hyperinflation.

Based on the extent of quantitative easing taking place, some economists and cryptocurrency evangelists are of the view that there will very likely be another financial or currency crisis in the near future (although no hyperinflation has as yet materialized in the US or the Eurozone). The massive money supply increase resulting from quantitative easing in the US and the Eurozone is frequently touted as the precursor to the US dollar’s demise by cryptocurrency fanatics (see the graph, or visit https://fred.stlouisfed.org/series/AMBNS for more detail). 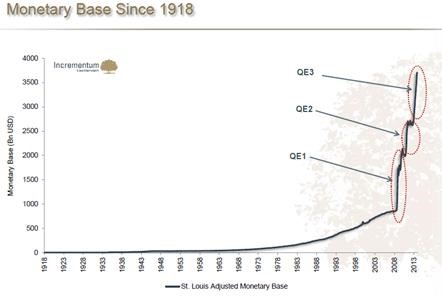 Why did recent QE programmes not lead to hyperinflation?

The recent rounds of quantitative easing programmes have not resulted in hyperinflation for a number of reasons. Firstly, the bulk of the total additional money supply did not filter into the real economy, i.e. base money did not necessarily increase as much as was hoped for. By way of example, the QE programs that were conducted by the U.S. Federal Reserve starting in 2008 increased the money supply by $4 trillion. The expectation was that the banks would lend the excess reserves to people and businesses in order to stimulate growth.  However, as can be seen in the following chart, banks held onto much of that money as excess reserves. At its peak, U.S. banks held roughly $2.7 trillion in excess reserves, which was an unexpected outcome for the Fed’s QE program. See https://fred.stlouisfed.org/series/EXCSRESNS for more information.

This graph shows that the dramatic changes in the overall money supply did not impact base money dramatically. Actual currency in circulation increased very steadily. See https://fred.stlouisfed.org/series/MBCURRCIR for more information.

Another reason why hyperinflation has not materialized is that globally there is too much supply and too little demand. There is slack in labour markets with too many unemployed workers chasing too few available jobs. Increased globalization, together with labour-saving technological innovations, are increasingly placing downward pressure on incomes, further reducing demand.

There is slack in property and real estate markets where booms went bust, particularly in the United States, the United Kingdom, Spain, Ireland, Iceland and Dubai. North America’s shale-energy industry has had a negative impact on oil and gas prices.

China’s slowdown, coming after years of over-investment in properties and infrastructure is also causing a global excess of manufactured and industrial goods. With domestic demand in these sectors having contracted, the excess capacity in China’s steel and cement sectors has put deflationary pressure on global industrial markets. Therefore, the additional money supply in this economic context will not easily drive up inflation.

One, therefore, has to be very careful about simply following the herd mentality and using the excuse of continuous “printing of fiat money” and the threat of hyperinflation as the reason why fiat money is unsound money.

Payments are a lucrative business that consumers are paying for

The other aspect of today’s monetary systems is that of payments. Payment systems between countries have not been effectively integrated. Technological innovation and automation has been slow at addressing the costs of cross-border remittances and improving the efficiency of cross-border B2B payments.

Meanwhile, the world is becoming increasingly globalized. Companies have been extending their operations or their supply chains across borders for some time now. People are working abroad and living across borders. Cross-border payments are increasing in volumes…

There are many reasons for the exorbitant costs of cross-border payments. Because of the lack of payment standards and insufficient integration, multiple parties become involved in clearing and settlement of international payments. Correspondent banks and the SWIFT network to name a few, all play a role in the payment process, resulting in additional fees entering the system.

… B2B cross-border payment volumes are in excess of $20 trillion USD per year!

The silent and subtle redistribution of wealth that results from inflation

Governments benefit from the effects of inflation

Governments are therefore easily able to finance their spending programmes because they have a captive audience to whom they can issue debt, at very low interest rates. Certainly much lower than the normal money market rates or interest rates that individuals are subject to for personal and other loan facilities. But one frequently overlooked matter that goes hand-in-hand with low government bond yields, is that of inflation.

What this means is that government tax revenue (VAT and income tax) increases at a higher rate (commensurate with the rate of inflation) than the interest payable on its debt.

Inflation also reduces the purchasing power of your currency, as discussed above. In extreme cases, it can lead to the devaluation of the country’s currency.

In addition to savings being negatively impacted by inflation, the interest that bank customers could have earned on their bank deposits move through the banking system to do two things:

Despite banks being compelled to hold low-yield government bonds in their reserves, they are still able to generate enough interest revenue to more than offset the low yield (or possibly losses in real, inflation-adjusted terms) they earn by holding government bonds. As a result, the low yield or credit loss impact is not absorbed by banks. Instead, it is passed on the banks’ customers. This, in effect, is the systemic and silent redistribution of savings/investment returns away from customers towards government debt repayments and banking profits.

In extreme cases, regulations can limit how much money individuals can move abroad in search of higher returns. Pension funds are also generally limited in terms of how much of the underlying assets are allowed to be placed abroad. This mechanism ensures that more of our savings are locked into the domestic economy to perpetuate this redistribution of wealth, rather than escaping the economy for better opportunities abroad. Regulations that perpetuate this are frequently associated with what some economists call Financial Repression.

While regulations that enforced were much more severe during the Financial Repression era (1945 to the 1980s), some still exist today. And even though some regulations have been done away with, others have been enforced. Capital Gains Tax for example will even direct some of your local, non-bank investments towards government.

For the first time we have a technology, Bitcoin, that allows us to escape these restrictions in a way that is virtually impossible for any government or regulation to stop or curb. Governments could attempt to ban Bitcoin, but to do so effectively would require them to severely impact your fundamental human rights. And any such tyrannical attempt will only force the technology to become more private, or flourish in other countries. The latter would be the result of economic activity such as mining moving to more Bitcoin-friendly jurisdications.

More of this in the next section.

Up Next: Part Four